The book makes an impassioned plea for saving elephants that have been part of India’s historical memory from the days of the Harappans, with enormous cultural value

India is a country where most auspicious occasions are marked by an invocation to Lord Ganesha, and kings were called Gajapatis! It is therefore ironic that Indian Forest Officer Sanjeev Kumar Chadha’s ‘Jumbos on the Edge: The Future of Elephant Conservation in India’ serves a reminder that we must act with alacrity to ensure that jumbos are not edged out forever. As Raman Sukumar puts it so succinctly in the Foreword: ‘whether in its role as an ecosystem engineer par excellence or as a much-loved deity in the form of Ganesha, the elephants’ biological and cultural legacy is unparalleled’. But the future is on a slippery slope.
We learn from this book that elephants had been domesticated and used in times of peace and war in the Harrapan civilisation. In fact, the author avers that the taming of elephants precedes the Harrapans. The Arthashastra also gives instructions for the care of elephants as well as their classification, training, diet, healthcare, and deployment in battle. Eight kinds of Gaja Vanas (elephant forests) are described in the Arthashastra, which shows that the state was certainly keen to keep an eye on the jumbos! We are also aware that in the hey days of the Kalinga empire, there were close to 99,000 elephants in the Imperial army. Most significantly, the only time Yudhishtar did not speak the ‘whole truth’ was with reference to the elephant that was also named Ashwatthama!

However, today the twenty-seven elephant reserves in the country hold less than thirty thousand elephants, and another three thousand are domesticated. The four distinct elephant groups in the wild are spread over four geographies – the Northern population of ~1600, NE population of ~9,200, Eastern population of ~2600 and the Southern population of ~12,800, besides forty feral elephants in the Andaman and Nicobar islands. In fact, even today the talk of elephant conservation is a sub text of the inevitable elephant human conflict as the elephant territory shrinks, and they are forced to forage for their food in settlements along the forest.
The strength of the book lies in the fact that Chadha is not just stating the problem, which is what most commentators do after a cursory perusal of Google and Wikipedia. What he has done is to take us on a journey of ‘Project Elephant’ launched in 1992 by the Government of India to address the issue holistically.The idea was to protect the elephants, their habitat, their corridors besides looking at the issue of man-elephant conflict and the welfare of domesticated elephants. States were offered financial and technical assistance to create the twenty-seven elephant reserves, of which nine are interstate. This involved notifying nearly 70,000 square kilometres of forest reserve and the development of a five-pronged strategy. This included planned management of the extant habitat for viable wild populations, measures for mitigation of man-elephant conflict, including support for change of cropping patterns, livelihood opportunities for human beings in elephant habitats, measures to protect elephants from poachers and other unnatural causes, research, awareness, and sensitisation to elephant mores in the development paradigm, and last but not the least, eco- development and veterinary care. 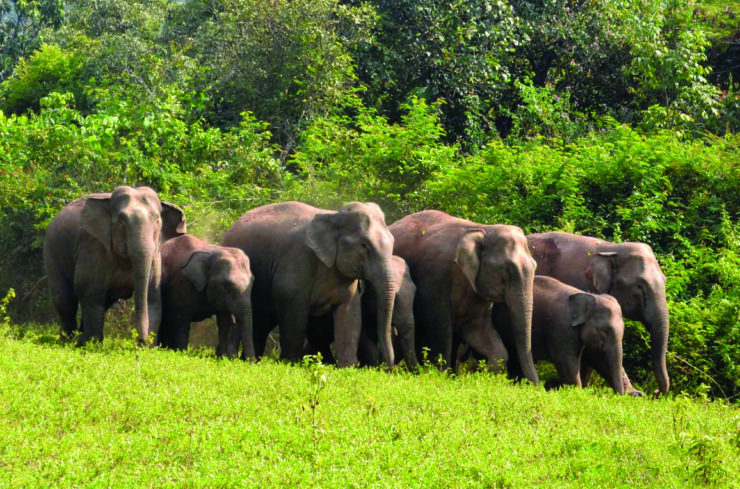 To my mind, the fifth chapter is the ‘core’ of the book in which the conflict mitigation strategies are discussed. Chadha says that the formulation of a mitigation strategy for a linear project (roads, railways, transmission lines and canals) must entail prevention of adverse impacts to the extent possible with design changes, reduction of adverse impacts, restoration of damage caused to the ecosystem and adequate compensation. The focus should not only be on mitigation at and around the project site but impacts on the wider landscape should be addressed with emphasis on maintaining corridor connectivity ‘Designing linear infrastructure must incorporate experiences across different habitats around the world. A regulatory regime is a must to alter human behaviour in and around the protected areas in the form of speed restrictions, road closures, restrictions on parking and feeding of wild animals.
The case study on the Rajaji-Corbett elephant range identified the Haridwar- Rishikesh -Dehradun highway and railway line, Chilla Power canal, eastern Ganga canal and the Kotdwar-Lansdowne-Pauri Road as the main impediments faced by the elephants in this range. He suggests elevated highways, overpasses, eco-friendly bridges on canals and water tanks, besides ensuring that power lines do not sag. There is a case study on the Dedicated Freight corridor and the Gautam Buddha Wildlife sanctuary. Chadha argues that with proper planning and foresight, adequate measures can be put in place to prevent the elephant–human conflict. What matters most is ‘sensitivity’ on the part of all stakeholders – for the decisions taken today have a long-term, and irreversible impact on the eco system.
Before closing it is important to understand some of the key constitutional amendments which have a bearing on wildlife conservation. These include Articles 48-A and 51-A. It is true that the (original) Constitution of India had no direct provision for environmental protection. Global consciousness regarding the protection of environment in the seventies, especially the Stockholm Conference and increasing awareness of the environmental crisis prompted the government to introduce direct provisions for protection of environment. Article 48-A was added to the Directive Principles of State Policy, which inter alia read: ‘the State shall endeavour to protect and improve the environment and to safeguard the forests and wildlife of the country.’ In addition to this, Article 51A made protection of environment a Fundamental Duty of every citizen. ‘It shall be the duty of every citizen of India to protect and improve the natural environment including forests, lakes, rivers and wildlife and to have compassion for living creatures.’ Thus, protection and improvement of natural environment is the duty of the State (Article 48-A) and every citizen (Article 51- A (g)).
While these two legislations had a positive impact, Chadha also draws our attention to the conflict scenario arising out of the Forest Rights Act 2006, which was passed by the Parliament to address the historical injustice done to people living in and around forests whose rights were taken away by the colonial state while declaring the forest as reserved. However, these notifications did not recognise the traditional rights of people living in and around the forests. The process of identifying such people, and verifying their claims was done at the level of the Gram Sabha, subdivision and district through committees constituted as per the provisions of the Act. Over forty lakh individual claims were received, of which nearly half have been settled and forty-one lakh acres of forest land have been distributed. However, the balance claims are contested, and this is a major source of conflict between the Forest administration and claimants, many of whom are backed by interested NGOs. Chadha points an accusatory finger at the arbitrary extension of the cut-off date from October 25, 1980, to December 13, 2005, as the main reason for this conflict.
In fine, this is an excellent read for all those interested in knowing why jumbos are on the edge, and how we must pool in our resources to ensure that they are back in the centre of an ecosystem which belongs to them!

A CHRONICLE OF TURBULENT TIMES

READING AND WRITING POEMS CAN CALM YOU

UNEARTHING THE COMPLEXITIES OF THE INDIA-CHINA RELATIONSHIP