Ode to a Rich Heritage

The photo project documents the lives and performances of the largely faceless but highly passionate practitioners of Qawwali, a form of Sufi devotional singing that aims to lead listeners to a state of spiritual ecstasy

The performance art of “Qawwali” is sung as a means of spiritual elevation, a music form associated with the Sufi traditions of the subcontinent.
The Qawwali Photo Project is the first ever photo documentation and exhibition on Qawwali. It is an initiative meticulously conceptualised where the untold story of Qawwali unfolds through the eyes of photographers. The practitioners are photo-documented with their performance art, their lives and their association with the Sufi shrines where they perform. The images of practitioners with their families, in their everyday lives and in their interaction with audiences and the pulsating connect of energy between them. 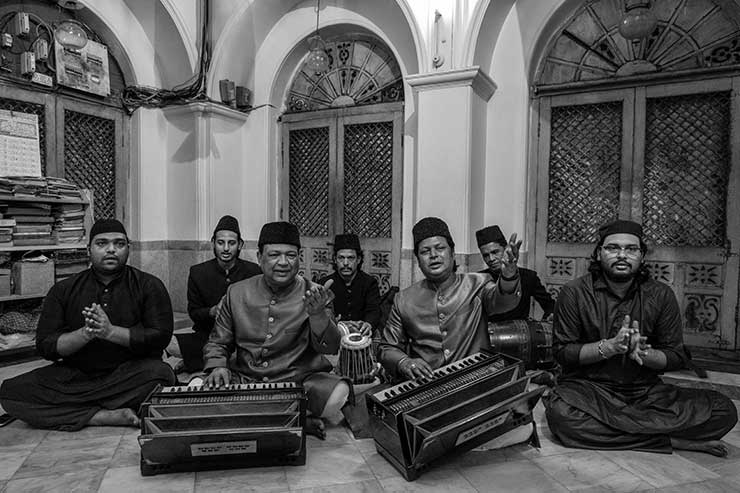 The Qawwals become the voice of the prayers of the hundreds of devotees that throng the shrine, seeking grace. This project brings to foreground interesting perspectives as captured through the mind and lens, with respect to the cultural and social dimensions of the art form that unfold like pages from a visual story.
As part of the project, the photography exhibition explored the art form through the power of images as a means of expression and communication. The images of the Qawwali practitioners are uniquely shot amidst the people in an organic, non commercial set up.
The Qawwals of the subcontinent have largely remained faceless, of course a name and a music that people associate with, but not the face of the man. This is what led to the formation of this project, to show the real faces behind this music. These musicians come from families where artistic knowledge and practice has been passed down for generations like a precious heirloom. Art is how they connect with themselves, their communities, and their sense of spiritual purpose. The technology at times dehumanises the music form, removes the human and only the sound becomes a memory. This project gives the image to the sounds, the identity to the people who give us the incredible music. The Qawwals. 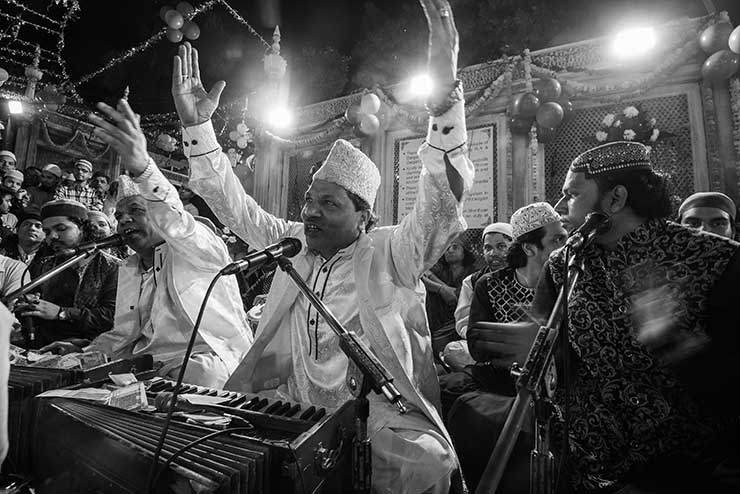 Dinesh Khanna’s photo stories traverse the important shrines of Delhi, Amritsar, Jaipur, Hyderabad and Ajmer and bring out the intricacies of traditions as an integral part of the music at the shrines. The Qawwals give him a peek into their own lives as he follows them at various places. The Qawwals believe they are in service of the Sufi Saints and would take their message of love forward. Dinesh explores them in resplendent colours and the darker tones of a bygone era, as they celebrate their performance art of Qawwali.
Mustafa Quraishi’s photo story is shot in the two prominent shrines of Dewa Sharif and Safipur ironically linked to each other. Interestingly, as an oral narrative it is said that when Waris Ali Shah the saint from Dewa, was born, his father Qurban Ali Shah was 90 kms away in Safipur at the Shrine where he was informed with a famous prophecy that his son will become one of the tallest spiritual saints of the region. With equal aplomb, Mustafa explores the resistance at Delhi and the complete serenity and grandeur of grace of Hazrat Salim Chisti.
Leena Kejriwal’s story captures the interesting deviation from the tradition, the presence of women Qawwali performers. In a largely androcentric performance art, it is important to document the women breaking barriers and participating in performing this music. The story continues where the Qawwals at the shrine of Hazrat Nizamuddin Aulia at Delhi are captured as they sing in their daily rituals not as a performance but as a prayer to their Pir. The association of each Qawwal to their shrine is intense and generational. 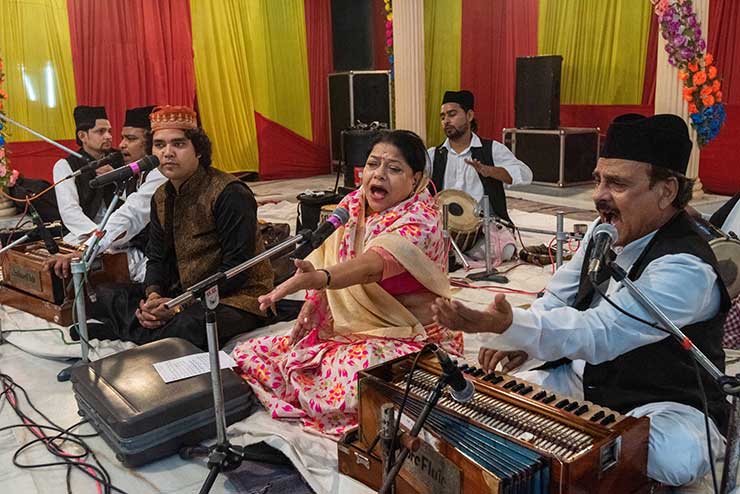 The way Qawwali is sung today, the present form and structure of music is credited to Hazrat Amir Khusrau in the late 13th century. He was a murid of Hazrat Nizamuddin Auliya. Qawwali became a new cultural and aesthetic expression by blending elements from Turkey, Persia and India. Amir Khusrau himself was of Turkish origin. It is said that originally Hazrat Amir Khusrau trained 12 children in the performance of Qawwalis and they are known as “Qawwal Bachche” and the subsequent family lineage from them are known as Qawwal Bachchon Ka Gharana (the House of the Children of Qawwal). Till date, the musical tradition continues unbroken at the shrine.

Basant, is typically a Hindu festival, that marks the arrival of spring and the celebration at the Shrine is ecstatic, the mood a euphoric yellow, the shrine is bedecked with yellow flowers, the people all dressed in yellow, the offerings of typically yellow mustard flowers are made by the Qawwals. They walk in a procession singing songs of Basant, largely written by Amir Khusrau, the favourite disciple, murid, of the Saint. 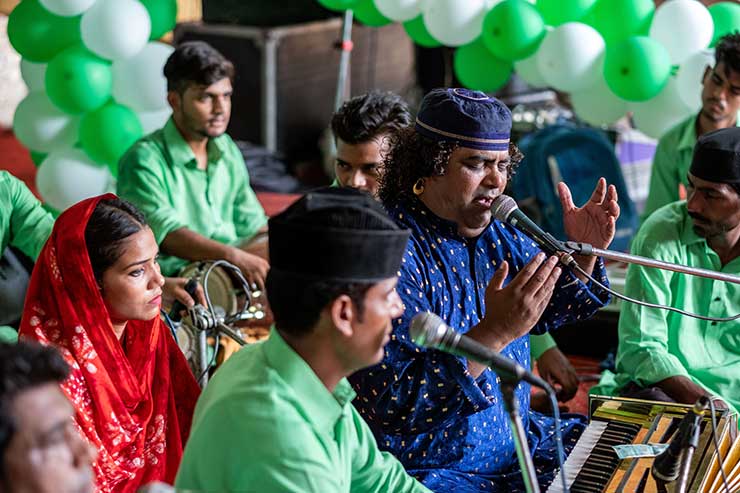 Mehfil-e-Sama, or the Assembly for listening, is considered important at the Dargah and hence Qawwali becomes a medium where believers create a link to spiritual bliss and to God through the performer. During the Mehfil-e-Sama, along with the lead Qawwal, there is a chorus of four or five men who repeat key verses and follow the intensity of the lead Qawwal who leads the verse. They follow his mood with their eyes on him and simultaneously aid the percussion by the rhythmic clapping of hands, all this taking the audience on a spiritual ecstasy.
Qawwali is a form of performance art that is a unique cultural symbol that represents to us the essence of ‘unity in diversity’ of India. It is very popular among all segments of religion and class and has a universal appeal during public events, drawing huge crowds.

(The author is the founder of Sufi Kathak Foundation, and the Qawwali Project has been conceptualised and curated by her.)