‘Gandhi wielded so much power without possessing any power’

An interview with Achutan Ramachandran on his recent exhibition ‘Gandhi: Loneliness of the Great’, his eternal endeavour to capture the harmony of nature, the lives, rituals and culture of the tribal community, and his belief in the power of art…

Achutan Ramachandran’s art (painting, sculpture, graphics) has for years successfully infused Indian classical imagery with modern ethos. Ramachandran grew up in Kerala amidst Carnatic music, lotus ponds, cashewnut trees and Raja Ravi Verma paintings. His now iconic lotus pond series are a tribute to the mystic beauty of nature, interlaced with parables and messages of a civilisation in crisis. For decades, Ramachandran has drawn inspiration from the simple and nature-loving life of the Bhils of Rajasthan, the pond at Ubeshwar Shiva temple, a constant backdrop of his luminous works. At 87, the activist in him has grown up, more adept at diagnosing the social crisis. The writer talks to the Padma Bhushan awardee on his recent exhibition ‘Gandhi: Loneliness of the Great’, his eternal endeavour to capture the harmony of nature, and his belief in the power of art.

Q. Gandhi appears to be a constant inspiration for you. In 2019, you created an exhibition ‘Mahatma and the Lotus Pond’ which included sketches of Gandhi and the now-famous sculpture of Gandhi depicting his martyrdom. What fascinates you about Gandhi?
A. I was 12 when I was introduced to Gandhi by my favourite teacher in school who was a Gandhian. He talked so passionately in class about Gandhi that I fell in love with him without knowing anything about him. Gandhi’s life appeared like a fairy tale to me. Later when I went to Santiniketan, I learnt to appreciate Gandhi more. Especially his ideas on Indian culture and his vision for independent India. His emphasis on strengthening the village systems, using indigenous materials and supporting the arts and crafts that emerged from villages. My teachers like Nandalal Bose and Ramkinkar Baij were greatly influenced by Gandhi’s thoughts and ideas. At Shantiniketan, they visualised an art movement largely inspired by Gandhi. Gandhi advocated the sustenance of a village structure where potters, weavers and other crafts people thrived. He inspired artists to create art that was attractive to common people and not remote from their lives. Unfortunately, the ruthless emphasis on science and technology, the encouragement to big cities and promotion of information and technology destroyed the cultural ecology of villages. I deeply appreciate Gandhi’s vision for India that was Indian in spirit and outlook. I tried to mould myself as an artist more inspired by his innate vision and moved away from the modernists.
As a political leader, too, Gandhi is a figure of reverence. There is no leader of his stature in this world. He wielded so much power without possessing any power. He influenced thousands without holding any office of influence. This is an enduring quality. While there may be many leaders like Nelson Mandela who made huge sacrifices, Gandhi’s position is unique in human history.He is beyond politics, he touched so many aspects of our lives. His idea of panchayati raj proposed to construct and not dismantle the village ecology. In independent India, village crafts and art traditions have been destroyed.
I am also impressed by Gandhi’s appearance and conduct: travelling third class, frugal living, consoling people during riots in Noakhali. His choice of clothing – his audacity to wear a loincloth and shawl on his visit to the Bukingham Palace – illustrate his courage and commitment.
Over the years, several of his photographs are etched in my mind. Some haunt me, like the one taken after his wife Kasturba’s death in 1944. He seems to be staring into blankness in that picture. There is so much one gathers from his photographs – his facial expressions, posture, his walk, his hand movement – about the human qualities. For me he stands out as a model. 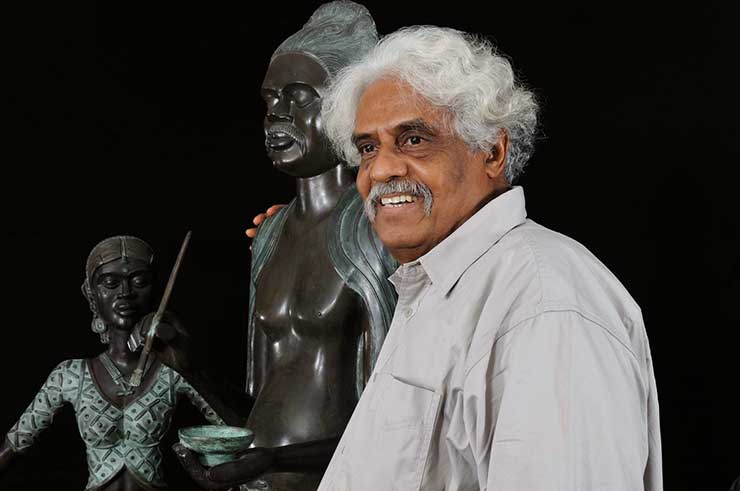 Q. How and when did you start working on the Gandhi drawings for this exhibition?
A. The drawings for this show were created between 2019 and 2020, when I went to Mumbai to stay with a friend. I was there for four months and worked on the drawings.The drawings drew inspiration from memory, history, current situation.

Q. You have been engaged with the tribal community (Bhils from villages of Undri, Pai, Ubeshwar, Eklingji and Baneshwar in Udaipur district of Rajasthan) for many years. Your colourful paintings celebrate their rituals and culture. Are the black and white drawings a shift in style?
A. For the last 40 years (except during COVID-19), I have been going to Rajasthan villages and staying with the community. I spend days observing the Bhils, participate in their rituals and customs, attend their all-night concerts. I learnt to train in this way from my teachers in Santiniketan who spent a lot of time with the Santhals in the district. Unlike the European studios, where painters created impressions of the models, at Shantiniketan we were encouraged to go out and observe, make quick sketches and then return and paint according to the inherent attributes of the subject.
I make thousands of sketches before starting to work on something. Then I reconstruct and reinterpret images.

Q. In your experience, does art have capacity to change things? Are your recent works a statement you are attempting as an artist?
A. I don’t think art really changes things. If that were so, after Picasso’s Guernica, which depicts the horrors of war, there would not have been any war. Art for political purposes is not something I believe in any longer. I changed my mind after witnessing the horror of 1984 riots. I saw a mob brutally murder a man. Before ’84, I believed that art can motivate change. Not any longer. For me, Van Gogh’s Sunflowers is a far superior painting than Guernica. In terms of craft, aesthetics, colours and light, Sunflowers is outstanding. That’s what an artist should strive for – beauty, aesthetics – a superior form. Even if the subject is gruesome, it may not be ugly in visual. Guernica is structurally superior, but Sunflowers demonstrates a certain spiritual quality. Sitting in comfort of our drawing rooms we cannot say this piece of art stopped war or influenced war.
If we want to change society, we have to go out on the streets, carrying placards and shouting slogans. You have to go out and address problems, like Mother Teresa did, Baba Amte did. As an artist, we need to create. At best, art can give momentary nirvana. If you want to change society, throw away your paints!

Q. With the exhibition entitled ‘Gandhi: Loneliness of the Great’ what message did you attempt to give? What about Gandhi endures with you?
A. I named this series more while recalling the image of Gandhi sitting next to Kasturba’s body, staring far away. His sense of loss, emptiness. That photograph haunts me. Gandhi had a vision for India. Sadly, that has been lost. That is disheartening. Besides, whether he was in a crowd, or sitting alone somewhere, he had a unique quality about himself. He was a very rare human being.
A Ramachandran’s exhibition ‘Mahatma and the Lotus Pond’was on display at the Vadehra Art Gallery, New Delhi, from 1- 10 October 2021.

Getting Intimate with Gandhi

A Ramachandran was 12 when he first sketched Mohandas Karamchand Gandhi. The Mahatma was a fairy tale figure for the young boy but as he grew in knowledge and art, he became more intimate with the revolutionary leader. In 1969, to mark Gandhi’s centenary, Ramachandran created sketches for a mural ‘Gandhi and the 20th Century Cult of Violence’ for Gandhi Darshan in New Delhi. Gandhi stayed as a constant study for the artist. In October 2021, Vadehra Art Gallery showcased 20 ink/pen drawings of the Mahatma. Each one takes the viewer closer to a flesh-and-blood Gandhi, fragile and strong, humble and self absorbed, courageous and giving. Ramachandran’s portrait peels Gandhi off his super-hero status. It brings him closer to all of us. 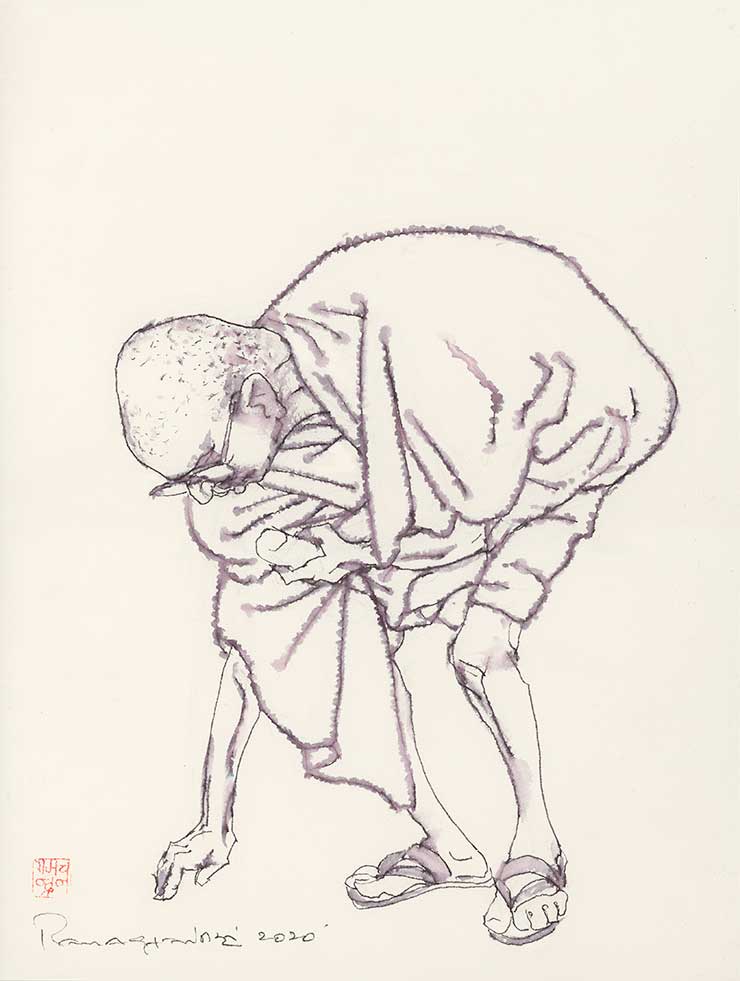 Gandhi breaks the British Raj Salt Law in 1930.Ramachandran’s Gandhi has fragile frame that rests on firm legs, his arms exude the power of Hercules: Ink and watercolour on paper. 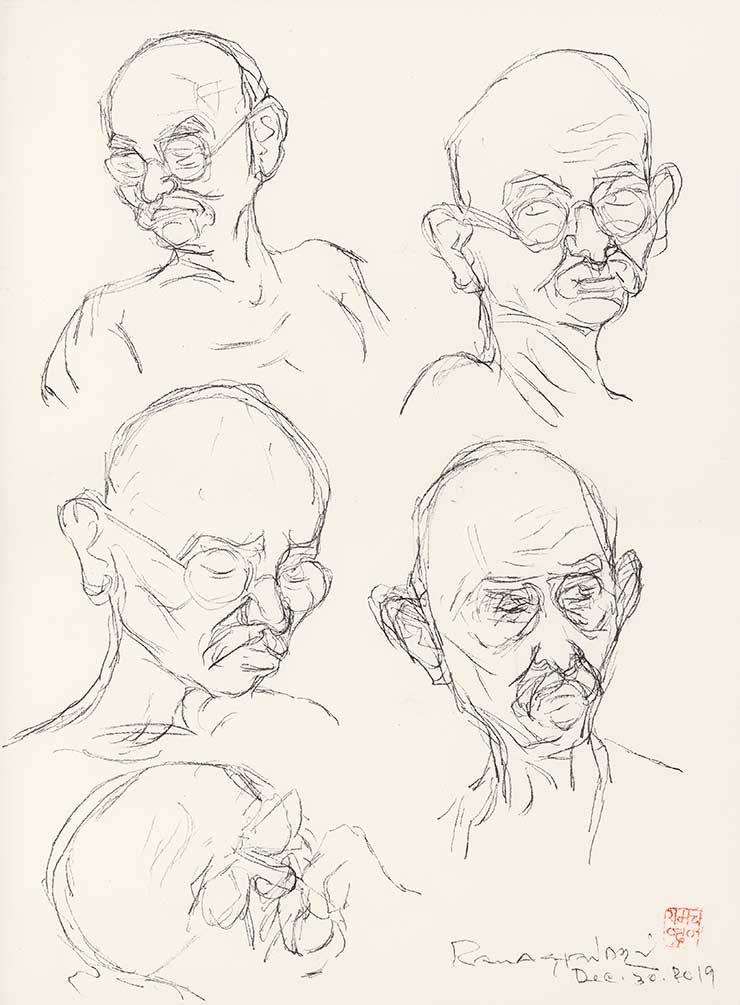 Ramachandran’s head studies focus on Gandhi’s eyes, lips, forehead, jaw, ears – pen and ink strokes combine to create the moments of self-reflection, sorrow, resolve, compassion and loneliness. Multiple lines create an intricate web of faces that portray a gamut of emotions. Gandhi is under the microscope: Ink on paper. 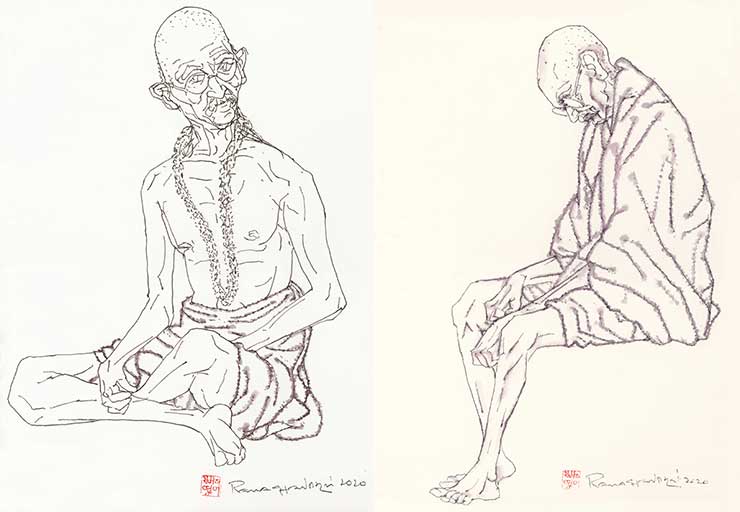 In some of the drawings, Ramachandran used a moistbrush to add to the intensity and emotion of the expression. Pale grey daubs give the portraits a depth, at times energising them, at times making them solemn. Gandhi in a meeting, and (bottom) reflective amidst setbacks: Ink and watercolour. 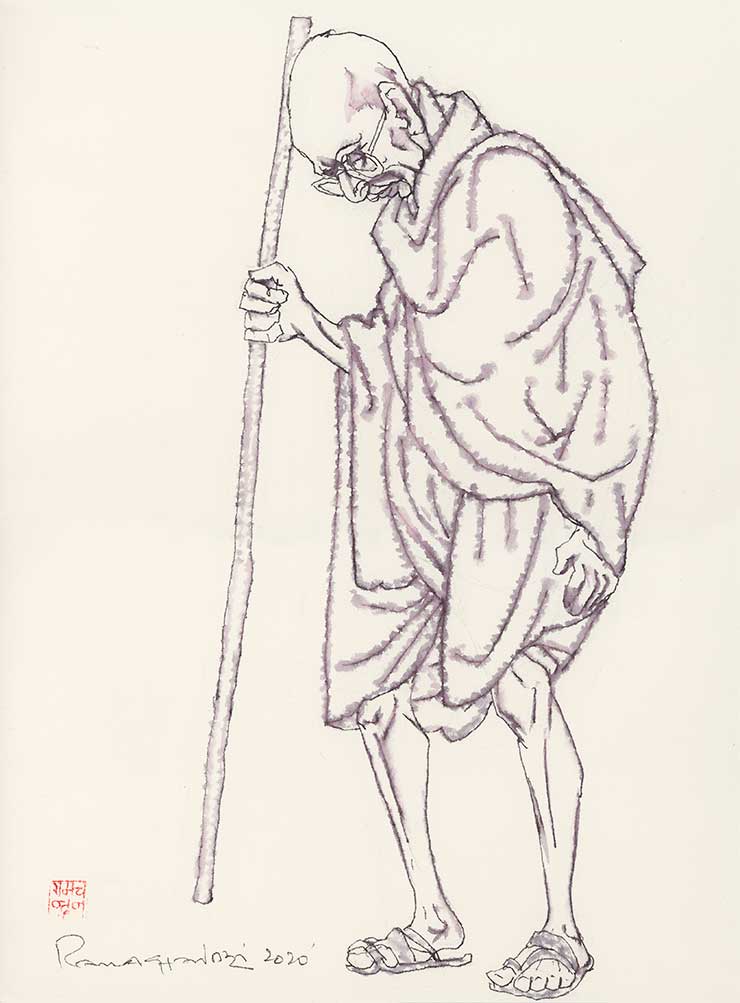 “The image of Gandhi determinedly walking alone through riot-torn Noakhali in 1946 has remained etched in my memory,” says Ramachandran. Often considered by historians as one ofthe finest moments of his life, Gandhi attempted to douse the fire of hatred as parts of North India were ravaged by communal riots. Ink on paper. 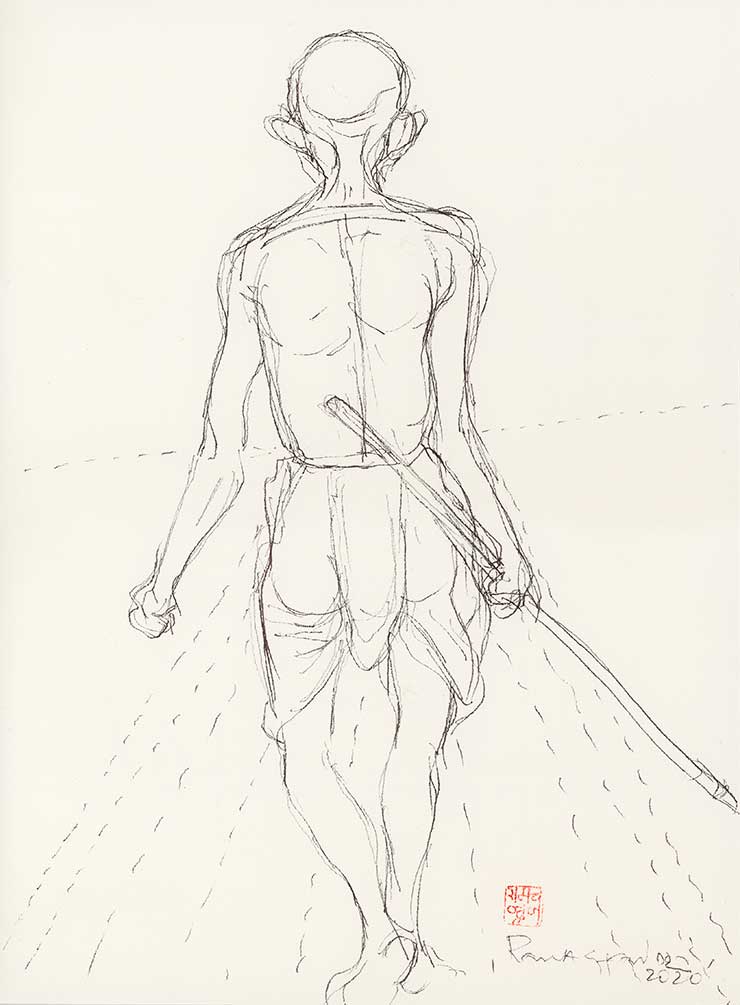 Art historian Ella Dutta comments in the Vadehra Art Gallery catalogue, “The image of Gandhi walking away with his back to the viewer remains a tantalizing work. Is Gandhi abandoning us or is he showing us a way forward?” The drawings are open to interpretation. They emote to some and set some thinking about the challenges that assail us today. Ink on paper. 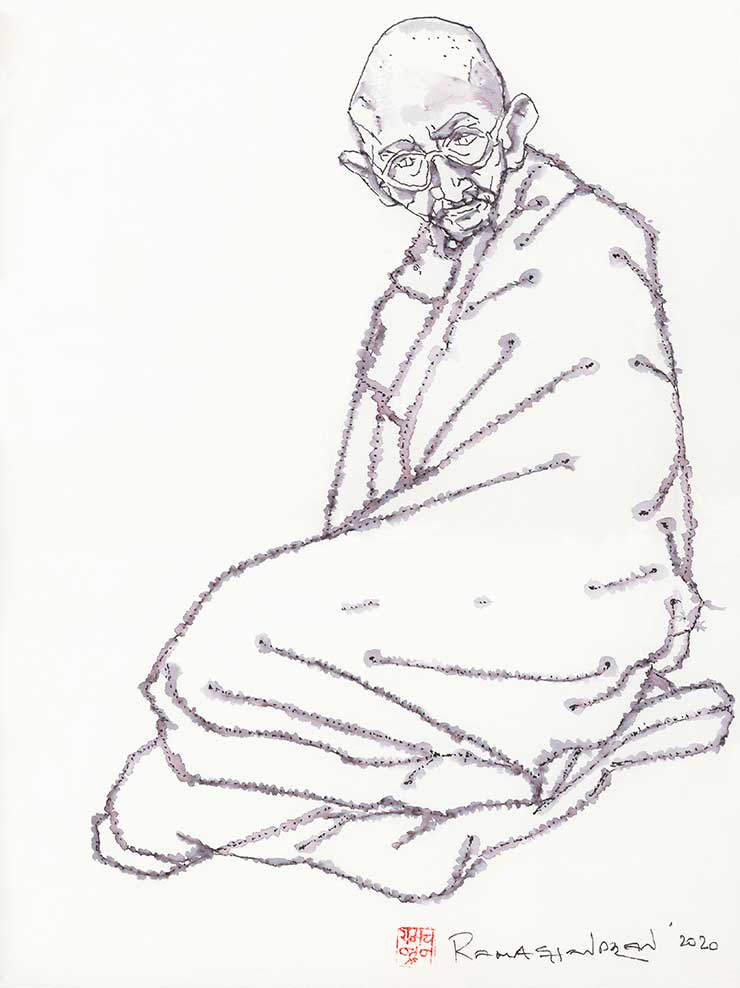 Kastur Kapadia was 13 when she married 14-year-old Mohandas. The Mahatma grew into a possessive young husband and continued to be a dominating spouse. Yet their bond of more than 60 years was remarkable. She was his better half – an equal satyagrahi and freedom fighter, a loving mother and grandmother and also one of the rare persons who could give him a fight. She breathed her last in on Gandhi’s lap at the Aga Khan Palace Detention Camp in 1944. The now famous photograph of a very lost Gandhi at her funeral conveys his deep loss he may have felt at her passing. Ramachandran’s Gandhi, wrapped in a shawl staring into blankness completes the portrait of a leader mourning for his partner and the loss of an era. Arun Gandhi, his grandchild, wrote in Kasturba, A Life, that as Bapu stood by the burning pyre of Kasturba, he said “The best half of me is dead. What am I going to do now.” Ink and water colour on paper.

(The author is a senior journalist and writes a blog on art and culture https://wordpress.com/post/iforart.wordpress.com/657 from which this article has been sourced.)