Mithila, which for some reason has now become synonymous with the famous Madhubani paintings on the contemporary cultural map, has a history of its own. The complete academic mapping of Mithila as a profound historical and socio-cultural centre has not yet been attempted. However, studies have been conducted in a few domains to uncover the marvels of Mithila. Yet, such studies also require comprehensive exploration. Madhubani Literature Festival (MLF) takes strong cognisance of the various customs, social settings, livelihoods, small-scale industries, cuisines, and handicrafts, which are especially embedded within rural communities, and subjects on the fringes, hoping to draw global attention to the phenomenon called Mithila. MLF is a fest for and by the villages; a carnival, to celebrate human expression in its myriad forms. The common idea associated with a literature festival is that it is a congregation of writers and readers. MLF, on the other hand, is a space to witness an integrated cultural sensitivity, a platform to express the differences, with the goal of finding and enriching common values. It has been held in different parts of India since 2018, providing an iconic space to relish the cultural flavour of Mithila as well as to understand the dynamics of cultural expression, especially with the onset of cultural discourse, which focuses on the experience, consciousness, and meaning that is derived from mutual interaction between people and technology. The idea is to explore everyday life that contains a story within itself. The connotations and symbols, attached to each aspect of society, are documented and presented through the many events of the fest. 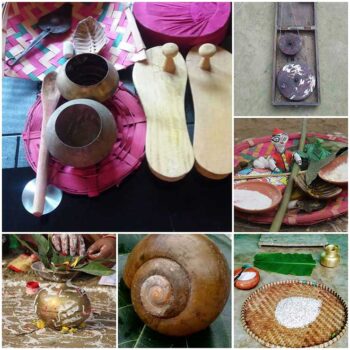 The previous editions of MLF took place in historical villages like Saurath and Rajnagar. Rajnagar, a major heritage tourist attraction of Mithila, hosted MLF, which is not just a fest but a movement to highlight the plight of this heritage, along with other cultural facets of the region such as Maithili literature, Mithila art, folk traditions, cuisine, culture, lifestyle, and philosophy (the region is home to four out of the six major Astika (theistic) traditions of philosophy, namely, Nyaya, Mimamsa, Vaisheshika, and Samkhya). The basic idea was to bring together the literary traditions and cultural practices, to ‘celebrate the local’, to integrate the communities of India and Nepal, and to let the world acknowledge and imbibe the rich and brimming culture of this region. Saurath, the historic seat of Mithila, was chosen to refresh the memory and the relevance of prolific institutions such as Saurath Sabha and the Panji system. The fourth edition, to be held in Kameshwar Singh Darbhanga Sanskrit University, Darbhanga, from December 12 to 15, is an attempt to explore the “rurban” (rural and urban) set-up while bringing attention to the historical Sanskrit University, and fostering an academic milieu. In Mithila, dalaan is a verandah or open space for reception of visitors, found in almost every house. Apart from its literal meaning, there is an obvious connotation attached to dalaan—a space exclusive to men. MLF came up with the idea of Stree Dalaan. The goal was to reform the traditional set-up while being inclusive with the regional language to indicate the social behaviour that attaches connotations to almost every aspect of living, e.g., a verandah. Stree Dalaan is a space bringing together women from all walks of life: rural to urban, employed, and unpaid, it promotes a women-centric and women-inclusive discourse. It is a metaphor that talks about providing women space where they feel a sense of belonging. The question that is addressed here is, when men have uninhibited access to the aangan (the inner courtyard), women must and should be integrated into the usually male-centric dalaan and no space should be static or exclusive. Aripan is yet another event from MLF that displays the rich art, symbol, nature, and spirituality of the region. The festival is a one point display of the rich handicraft, stone pottery, white metal statuettes, bamboo artifacts, sikki work, Sujani craft, and much more. The emphasis is on the assimilation of the rural population. Literature, at its core, is the expression of a society; MLF is a platform that records the expression of the villages, and facilitates a dialogue between the rural traditional cultural expression and urban contemporary cultural impression. The idea is to document literature, and create a development-oriented discourse, assimilating and engaging the rural population. The Mithila body politic has a deep cultural segment that has been the epicentre of societal ethos. As a development-centric fest, it focuses not just on the celebration of culture but also includes and aims at bringing the societal concerns into the mainstream of discussion and consequent action at the grassroots level. It engages and encapsulates all the components that function as a building block of the cultural congregation. Among the many objectives, the focus always remains upon making a social, economic, and cultural impact on the very basic but vital unit of the festival—the small-scale industries. The local people involved in bookselling, handicraft, home decor, weaving, painting, printing, and so on, have high potential, which is often neglected in the technological race that has captured attention. While these people do labour-intensive work, their efforts are neglected due to a lack of platform and a reasonable market. The festival is dedicated to enabling these groups with a space where they can showcase their products to the mass consumer from different regions of the country. A confluence of multicultural discourse, it promotes local artists’ engagement with contemporary means of marketing. The organising committee lays emphasis on involving local groups in the making of traditional cuisine, site decoration, and pamphlet printing. Thus, every effort is to ensure income generation for the small-scale industries. An international exhibition, Vaidehi, will contain bamboo frames to adopt the idea of ‘Go Green’, and at the same time, promote the bamboo handicraft workers. The Bagghi Heritage Ride, in the fourth edition of the festival, will offer a spectacular view of the historic town for the riders, and income for the hard-hit carriage-owners. 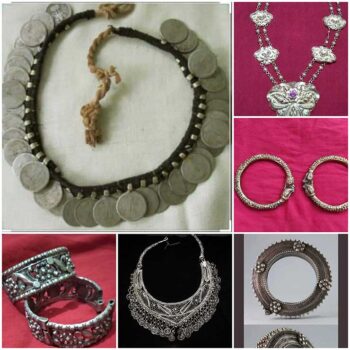 I remember reading tales from the Ramayana as a child, with utmost focus on the hero of such a great epic. Somehow, the discourse would neglect the women characters because of the prevalent androcentric approach to knowledge. Vaidehi, an international art exhibition of Mithila painting centred around the theme, ‘Many forms of Sita by Many faces of Sita,’ showcases the imagination and interpretation of Sita by the artists. The effort is to create a space for dialogue and aesthetics where women express their interpretation of Sita with a very regional and traditional medium of art. Sita is an archetype of the ideal wife. The exhibition will display the uncommon forms of Sita, her divinity and courage, that are pivotal but forgotten within her. 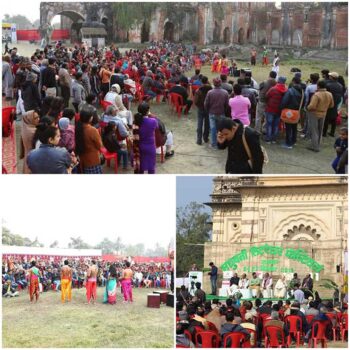 There is a widespread belief underlying the disconnect of youth from culture. A literature festival cannot exist solely based on historical and cultural reminiscences. It is necessary to comprehend the view of youth towards diverse practices and the history of folk tales—to study, discover, reinterpret, and celebrate the numerous cultural meanings. To trace the relationships among aesthetic, anthropological, political, economic aspects of cultural production and reproduction, it is necessary to record the response of youth towards non-material culture and the cultural institutions, which are important actors in the promotion of cultural understanding, intercultural dialogue, and cultural diversity, and in the transmission of culture across generations. MLF has conceptualised the youth segment of the festival with the framework to understand and bridge the gap between the traditional and the modern. Yuva Sahiti is a space to deliberate upon the cultural concerns of youth in the form of debate, discussion, poetry, and much more. 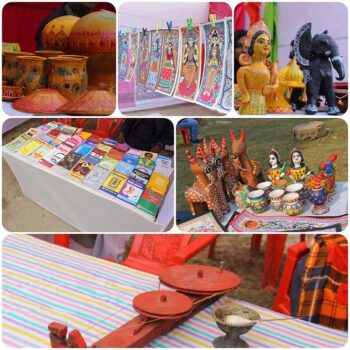 EXISTENCE TO EXTINCTION: THE TALE OF KOKTI

MLF is not just about discussion and representation of heritage. The idea is to focus on constant generation of knowledge and creation of social impact. Bihar is known as an agricultural belt with a vast population dependent on agriculture as a source of livelihood. When we assimilate village and fest, we learn that the many dimensions of villages are centred and dependent on agricultural products, and their whole lives revolve around the conservation of and extraction from nature that is expressed through their customs, economic conditions , and meanings attached to certain plants, trees, and the natural world. The purpose is to bring together the many aspects of living in one chain, and foster academic works oriented towards understanding, and solving the many problems faced by society. 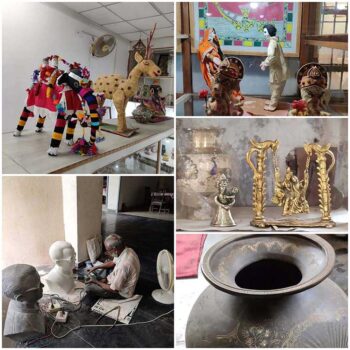 Kokti cotton (gossypium herbaceum) is a nearly extinct variety of cotton once grown extensively in the Mithila region of Bihar. The cotton appears to be a specialty of the Tirhut region, as noted in Grierson’s Bihar Peasant Life, published in 1885. Records from the official report of the Calcutta International Exhibition (1883–84) further elaborate upon the high-value and royal patronage enjoyed by Kokti cotton. The cotton was widely used for making sarees and dhotis, as well as paag—the traditional cap worn by males from the Maithil community on all occasions of religious and social importance. Given that Kokti cotton holds economic and historical significance for the people of Mithila, it is surprising that this rare cotton variant is almost extinct, at least in Bihar. The fest intends to promote academic mapping of the oral and limited written history of Kokti, which has an immense religious value in the region of Mithila and at the same time work in the revival of industries centred around Kokti to bring global benefit to the region. MLF is aimed at making a difference to the vernacular, a space where marginalised literary voices can challenge the monolithic cultural narrative propagated by the glamorous state. One of the main future objectives of MLF is to assimilate different cultures and create a multicultural environment where every dialect, language, custom, belief system, art form, and practice is in harmony with one another.

(The author, a Delhi University student, works for the Centre for Studies of Tradition and Systems, which conducts Madhubani Literature Festival.)
ShareTweetShare