This is a book of profiles of nine women achievers from a bewilderingly wide range of fields, from a film actress (Rituparna Sengupta), rights activist (Aruna Roy), karate champrion (Sandhya Shetty), racing driver (Bani Yadav), wildlife biologist (Latika Nath), interior designer (Payal Kapoor), dancer (Mallika Sarabhai), mountaineer (Premlata Agrawal) to beauty and wellness expert (Blossom Kochhar). Author Swarnendu Biswas is a journalist, and in this book, he combines the diligence of a journalist of not leaving out the details of the person’s life and personality. But what makes this book disarming is his unabashed admiration for the women he writes about, the admiration of a man for women achievers. Feminist ideologues might accuse him of the much-maligned male gaze, but Biswas wears his heart on his sleeves. That is why, these profiles are more than mere journalistic pieces. The fact that the women in this book have given him time and spoken about their public and personal life is a clear vote of confidence for the man who wrote about them. There is quite a bit of sentimentality and mushiness in the writing but that shows the author is willing to show his vulnerability. It is easier to write a clinically, objective piece. 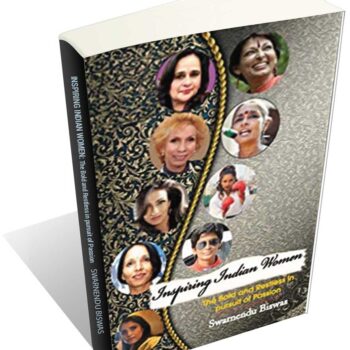 For example, he writes in his introduction to Payal Kappor, the reputed interior designer: “Amidst the sea of crowd was a thin fair girl with large black eyes with a sea of dreams swimming through them.” Then he writes at the beginning of his interview with her: “Payal Kapoor laughed indulgently at the mushy introduction given about her by my mediocre writing as we sipped cold coffee in her well decorated study. I do not know whether she liked it or not, but I decided to keep it nevertheless.” Of course, this would not have passed muster in any of the Indian newsrooms because of the strange officious attitude adopted by many of the editors. But it is this candour, which could make the reader wince, that makes the book valuable. Here is an honest account of a genuine encounter between the writer and his subject, one of the true joys of journalism.
At other times, he adopts the plain journalistic style which says it all. He writes: “A person who does not know her would be amazed to know that this simple, down-to-earth housewife became the oldest woman in India to scale Mt. Everest, the tallest peak of the world. Yes, Premlata Agrawal did achieve the coveted distinction in 2011, at the young age of 48.”
Biswas chooses his subjects well and reveals a lot about the human being behind the stupendous achievements. It is this factor that makes the book a valuable read. There is need for more books like these about more of our achievers. It is a good thing that a man has written about these women achievers, and he does not fight shy of hiding a man’s admiration for these women.

(The reviewer is a senior journalist and political commentator.)