At 50, Kerala-born mural artist Suresh Muthukulam has carved a unique position in the art world. He has pulled the ancient mural tradition out of Kerala temples and palaces and placed them in people’s living rooms showcasing contemporary themes.
By Malvika Kaul
Mural artists can be like clairvoyants – they see more and can see far. At times magicians, and at times shamans, the extra-terrestrial, the divine and the human are painted in a mural with brilliant ease. Kerala-born Suresh Muthukulam is one such super illusionist. Trained in the 9th-18th century mural tradition, Suresh’s works are magical spells cast on canvas. He sees the divine in humans and the fallible in the supernatural. His brush has converted Lord Krishna to a toddy tapper, a cyclist and an elephant trainer. In one Delhi exhibition, ‘Backwater Cameos’, Suresh presented the everyday rural life of Kerala blending myths, reality and fantasy in deep blue, bright ochre and calm green. Some who visited the 2010 show still remember Suresh’s creative genius to show celestial beings hanging around in the backwaters with chilled out boatmen while the dragonflies danced in the air. His paintings appear to be grounded on earth but transport you at times to the paradisaical, blissful world. 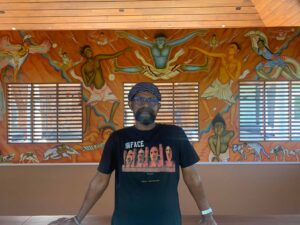 For close to two decades, Suresh’s art appears like a homage to the mural tradition. Since childhood, Suresh was fascinated by murals. He was mesmerised when he first saw the Gajendra Moksha (largest mural panel in Kerala) in the Krishnapuram Palace in Kayamkulam, Alappuzha district in Kerala. Suresh visited the palace many times and every visit left a deep memory. In a few years, he joined the Institute of Mural Painting, Guruvayur Devaswom, in the pilgrimage town of Guruvayur.

Suresh says a mural artist should have deep knowledge of ancient texts, history and colour combinations. Mural painting requires immense patience and determination. It takes years to grasp the nuances, understand the rhythm of colours, and appreciate the tone and texture of the visual fantasies that will be woven on the walls. In a mural, the past, present and the future can be entwined. Suresh is particularly indebted to Sri Mammiyoor Krishnakutty Nair, his teacher and founder of the Guruvayur Devaswom. Suresh says he not only trained him in artistic skills but encouraged him to develop his own expression and style. His guru wanted him to take the murals out of the temples and put them in living rooms and art spaces.

In many of Suresh’s works, Hindu gods and goddesses appear along with village belles, farm labour and schoolchildren that seem to be in rhythm with the flora and fauna. This is a deliberate artistic intervention. Suresh says at the beginning of the millennium, the Indian art scene appeared to become more accessible to public. Art exhibitions, festivals and biennales nourished the art scene in India. It is around this time that he decided to transition from ancient mural art to contemporary mural art. “I am proud to have led this movement,” he declares.
Jaya Mani, prominent art curator, based in Bengaluru who is also the founder of Dravidam a gallery that has showcased Suresh’s work since 1992, says Suresh has developed a contemporary aesthetic style which is now widely recognised as his trademark. “Watching Suresh grow and evolve as a contemporary artist and develop a unique style has been one of the most fulfilling experiences of my long career in the arts.” Suresh’s magical canvases find space in the Delhi Chief Minister’s office (former Chief Minister Late Sheila Dikshit was a fan), the Vatican Museum (featuring the Last Supper in mural style), the Chhatrapati Shivaji Maharaj International Airport Mumbai T-2 (displaying a 17-feet mural of the guardians of eight directions), and the Gandhi Darshan in Delhi (showcasing Gandhi’s life story).

Mural artist should have deep knowledge of ancient texts, history and colour combinations. Mural painting requires immense patience and determination. It takes years to grasp the nuances, understand the rhythm of colours, and appreciate the tone and texture of the visual fantasies 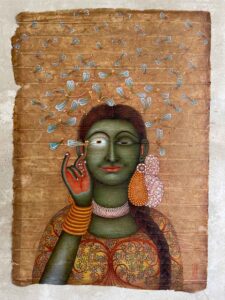 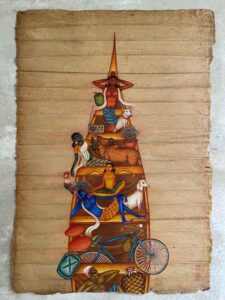 Suresh’s clientele is both young and old – those who appreciate the indigenous, desire something close to their cultural roots but also love to indulge a visual fantasy. In his 2014 exhibition ‘Holla Mohalla’ in Delhi, Suresh married two very diverse landscapes of Kerala and Punjab. Suresh created a new vision of the Nihangs, the armed Sikh warriors who throng the traditional three-day Holla Mohalla festival – a vibrant display of sports competitions and martial arts during Holi at the Anandpur Sahib in Punjab. After attending the festival in 2013, Suresh decided to blend the spirit of valour of Nihangs with the serenity of a Kerala boatman. His warriors were flying in the sky with their swords, riding bicycles with children, and playing a musical instrument. They were painted mostly in conventional deep blue and white, but the ambience of saffron and ochre almost took you back to the clay-tiled roofs of Kerala.
Recently, Suresh worked under the guidance of acclaimed film director Adoor Gopalakrishnan on the Varkala project, a performing art centre developed by Kerala Tourism department. Varkala is around 40 km away from Thiruvananthapuram, the capital city of Kerala. The project attempts to visually document the rich art heritage of Kerala – the folk and classical arts like Thiruvathirakali, Theyyam, Thira and Padayani along with Kathakali and Mohiniyattam. Close to 2,000 square feet of murals have been painted by Suresh and his students during the lockdown months in Kerala. It has been one of the most demanding and satisfying experiences. Suresh would like to see more art being taught in schools and colleges. And more freedom for art students and artists in India to explore various aspects of their creativity.
The pandemic has turned human life upside down. These are the worst times, but Suresh also sees them as the best of times. “This is the best time for an artist to concentrate more on her/his subject while sitting at home. I think many artists have utilised most of their time at home in learning and absorbing and creating.” Suresh believes an artist grows only if s/he creates more. “I believe we are now waiting for the sun to rise again in this world.”

(The author writes a blog on art https://iforart.wordpress.com/)