The Aryans and their descendants prized ghee or clarified butter. Ghee continued to be used in Indian royal kitchens during the time of the Delhi Sultanate and the Mughal era, while also being adopted in the kitchens of commoners, through to British times

In a previous column, we had mentioned learning and learning organisations. As important as learning is, the concept of unlearning is, in our view, equally important. In this column and the next, we will be discussing ghee as an example of an item in Indian cooking, the use of which we must unlearn. The recipe we would like to introduce for this month’s column is called “Kairi Mutton Do Pyaza”, which is from the kitchens of the Nizams of Hyderabad and, based on this, we will continue using the theme of Islamic-style art and architecture in this month’s column as well. Below is another picture from Hyderabad and another fine example of Islamic-style architecture.
Ghee or clarified butter has been considered one of the best cooking fats in Indian cuisines for centuries. The reason for this is historical. There have only been roughly a baker’s dozen of large animals that have ever been domesticated across the world. In fact, this has implications for human civilisation as a whole, and this is for reasons that we discuss here. It is worth first talking about the animals that have been domesticated in America. The only animals that have ever been domesticated in the Americas are the llama, the dog, the guinea pig and the turkey. The only large animal among these is the llama and even the llama cannot be used to haul loads over long distances. So, that means that due to sheer chance, the Americas had no animals that could do the work of horses or oxen and, as Jared Diamond argued in Guns, Germs and Steel, this impeded the development of large cities in the Americas. 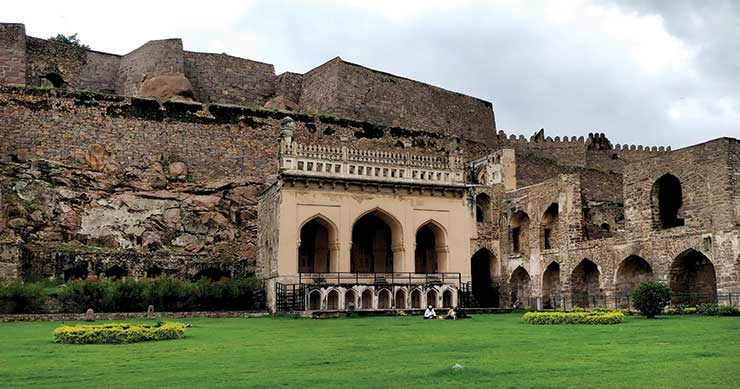 Now, one of the most important animals that ended up being domesticated in the Indian subcontinent happened to be the cow. Given the relative scarcity of food in pre-modern times, utilising the output, namely, milk, beef and hide, of these animals in innovative ways was key for societies around the Indian subcontinent. Given the relatively small numbers in question (just around 13 animals having been domesticated around the world in total), it should therefore not be surprising that the milk of one particular animal out of this baker’s dozen was what was considered the most beneficial, viz., the cow. Given few choices, pre-modern societies have tended to gravitate towards one choice, often with not much evidence, and this is perhaps a manifestation of the Groupthink effect.
The effects of this sort of Groupthink are more widespread around the globe today than we may imagine. Another example of Groupthink is the wide adoption of monotheism as a belief system. And that short segue permits us to introduce our next picture for this column, the Taramati Mosque in the Golconda Fort area in Hyderabad.1 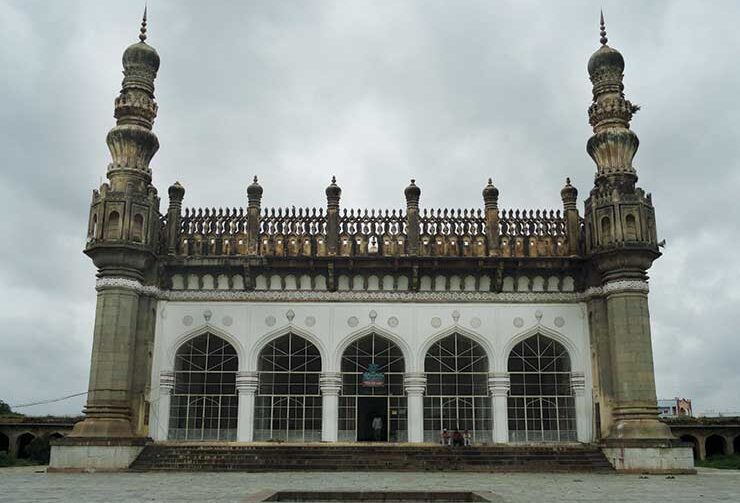 The Aryans and their descendants prized ghee or clarified butter. The ritual beverages, the madhuparka and the panchagavya, had ghee as one of their components. Many dishes were both shallow-fried and deep-fried in ghee, including the apupa. Ghee continued to be used in Indian royal kitchens during the time of the Delhi Sultanate and the Mughal era, while also being adopted in the kitchens of commoners, through to British times.
Again, the fact that pre-modern societies zeroed in on one choice should not be surprising, and in the absence of scientific principles to guide them, they have often gravitated towards one choice (or, in some cases two) as is also evidenced in the adoption of monotheistic belief systems across the world. In fact, a prominent theory in anthropology advanced by Diamond holds that it is precisely because there were no animals that could be domesticated in the Americas that civilisations were unable to proceed past the Stone Age or the Bronze Age, and enter the Iron Age. Also, the availability of draught animals and the consequent emergence of cities and, therefore, diseases is one of the main reasons that Africa was not colonised other than in its littoral zones, coastal areas and distant islands whereas America was. It is this tendency of pre-modern societies to zero in on one choice out of many that has led to the veneration of the cow in the religion of the Aryans and, thereby, the treasuring of ghee. Thus, it is purely a historical accident that Indian cuisine prizes ghee above all other cooking fats. 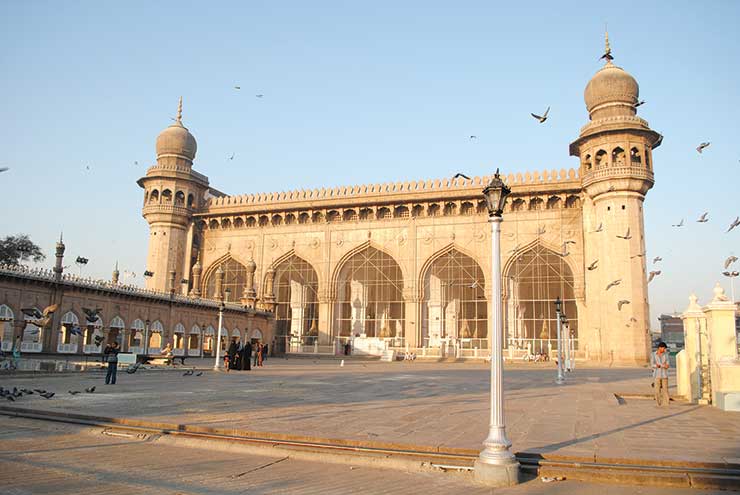 Nutritional research into the diets of people around the world has left the status of ghee as a good cooking fat in significant doubt. While the research in question (that of the late 20th century and the early 21st century in the West) has not been entirely conclusive, there is significant evidence to indicate that milk-based products such as ghee could have negative consequences for health. Coming back to the matter of ghee and cow’s milk, it is important to note that cows themselves don’t need to drink their own milk to remain healthy and produce lots of calcium-rich milk. In fact, cows transform the polyunsaturated fatty acids that they consume into saturated fats in their milk, and this has the following evolutionary explanation: because cow’s milk has saturated fats, this enables the calf to grow more quickly. Cow’s milk, ghee and other dairy products are high in fat, and have especially high concentrations of saturated fat and trans-fatty acids.
The main takeaway here is the idea that it is merely a matter of historical accident that we eat the meat of chicken, goats and cows, and drink the milk of cows, primarily, and goats here in India. It is worth noting that the meat of goats and cows is certainly not necessary for humans to survive since the people of the Americas survived just fine for centuries without eating any beef or mutton. Therefore, whenever you see mutton or beef on an Indian recipe, keep in mind that it is merely the accident of history that you are eating the meat of this animal. There is no real science behind it. A plant-based diet which avoids any animal products may well be the healthiest for us on a regular basis, as much evidence in the field of nutritional science indicates.
The recipe for this week is from the royal kitchens of Patiala. It uses both mutton and ghee. To be eaten only when you are taking short, infrequent breaks from eating a plant-based diet. 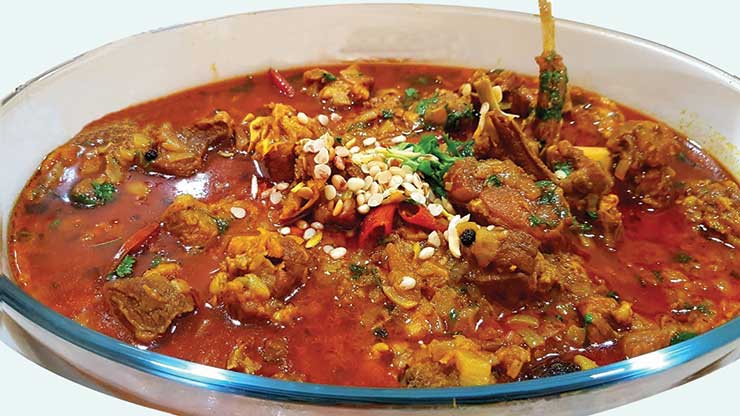 METHOD
Step 1
Place a heavy-bottomed pressure cooker (without the lid) on the stove over medium heat.
Step 2
Pour the clarified butter in the cooker and let it heat.
Step 3
Once the clarified butter is hot, add the black cumin seeds (shahi jeera) and cook for a few seconds.
Step 4
Now, add the chopped onions and stir-fry until golden-brownish.
Step 5
Next, add the goat meat (in the bone) followed by red chilli powder, salt, coriander powder and turmeric powder. Mix nicely for a minute.
Step 6
Add the ginger-garlic paste and pour some water (2 cups). Mix well and close the lid of the pressure cooker (lock it). Cook.
Step 7
After 3 whistles, release the pressure and remove the lid. Add the raw mango (peeled, de-seeded and chopped) on top of the meat curry.
Step 8
Place the lid on the pressure cooker again (do not lock it) and let the meat cook for 15 minutes on low heat.
Step 9
Finally, turn off the stove and remove the lid. Serve this Kairi Mutton Do Pyaza garnished with fresh coriander leaves.

(The author is a strategic management expert, economic historian, poet, Indologist, and a computer scientist. Currently, he is the editor of Termite, the journal of the Epimetheus Society, Top Society and a couple of other High IQ Societies.)