Literature defies borders, and words transcend the moment in which they were first written!
Now in its fourth edition, the Valley of Words (VoW) festival has from the very first year if its inception included books, authors, thoughts, ideas, and offerings of philately from across the world. This has not only connected us with the Indian diaspora, and writings by Indians in multiple languages across the world, it has also shaped our perspective of looking at ourselves, critically examining the texts and contexts, besides showcasing the best of India to the world.
As the festival is around the corner (November 20-22), let me focus on the sessions in the current edition across the knowledge verticals. We begin with a message from His Holiness the Dalai Lama, and it is interesting to note that in the very first edition we had discussed his arrival in India at the Tawang Monastery in Rani Singh’s book. Singh is a UK-based BBC documentary producer and this book records her conversations with her grand uncle Har Mander Singh of the Indian Frontier Administrative Service. We then have the inaugural address by Shri Dharmendra Pradhan whose support is the rock-solid foundation for the Valley of Words to take the shape it has taken.  It is he who has given us the confidence to steer through the tough times of the pandemic this year, and advised us that the show must go on and that the new mantra is ‘virtual is the new real.’ 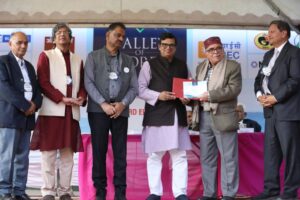 Of the four knowledge verticals, Military History and Strategy has a direct connect with the world beyond the borders of India. Inaugurated by Minister Dr Jitendra Singh, it talks of the valiant Dogras, and the frontier boundaries drawn by the legendary general Zorawar Singh under the Dogra rule, which then laid the foundation for the McMahon Line, which for us is the Northern border.  It then talks of the Great Game 2.0 in which the US and China are trying their best to assert their hegemony wherever they can, but for us, in India, the Chinese challenge is here and now, especially in the context of the CPEC. We have sessions on Taiwan, as well as on India’s readiness to face multiple adversaries and the role of Artificial Intelligence in determining the future shape of wars.
The sessions in the Hindi vertical focus on teaching, writing, and reading of Hindi abroad. Authors from across the world: UK, Canada, US, Hungary, Poland, and Norway are expected to join the session Desh Videsh Mein Hindi. Last year, we also had a session on Hindi newspapers published in India before 1947. Many of these were produced by the INA soldiers, and they capture the stories of the tribulations and triumphs of Indians in the times of the Second World War. Over the years the number of Hindi authors, speakers, and anchors is rising steadily, and this year several institutional links have been established. Another aspect of the international dimension of the festival is that all the Book Launches have been co-ordinated from Kuwait by our expatriate author Madhulika Mohta. She has also supported the Red Rabbit VoW Photography Awards to acknowledge the heroism, bravery, and valour of helicopter pilot Captain Ranjive Lal who laid down his life in rescue operations in Uttarakhand.
The RS Tolia  Forum in the VoW looks at Himalayan ecology and environment, and this year the focus has been on the impact of the pandemic, and the response to it at local, provincial, national, and global forums. Over the years, this Forum has focused on the role of the Indian explorers who helped chart the territory of Tibet. Given our proximity to Nepal and Tibet, VoW had offered a platform for a nuanced discussion on these issues.
Before we discuss English knowledge verticals, let me mention that France is the partner country for this year’s edition of VoW. In the first session   ‘Rajas, Nawabs and  Firangees’, Dr Samuel Berthet is in conversation with this columnist on the inspiration behind the exhibition, as well as on the integration of French territories – most significantly – Chandernagore and Pondicherry, both on the East coast of India. The French Ambassador Lenain is also in conversation with Brig Sukhjeet Singh, the grandson of His Highness Maharaja Jagatjit Singh, the Francophile ruler of Kapurthala who modelled most of the state buildings on designs of the French palaces.  Cynthia Meera Fredrick has done painstaking research to produce the wonderful book ‘Prince Patron and Patriarch’ which captures the life and times of the Maharaja, whose hundred and fiftieth birth anniversary falls in 2022!
The sessions in the English and miscellaneous verticals have quite an international flavour about them. Our prize-winning author Manreet Sodhi Someshwar is based out of New York, The sessions on India and her neighborhood were curated by Atul Singh of the Fair Observer in conversation with Prof Ishtiaq Ahmad of the Stockholm University and the author of ‘Garrison State’.  ‘Fierce Femmes and Notorious Liars’ by Kai Cheng Tom, a Canadian author, made it to the shortlist of the PFC VoW Awards.  Thanks to the online option, Team VoW was able to connect with Yashica Dutt, now in the US on her work coming out as a Dalit.
Another very interesting session is on the Maps of the Indian States, and the integration of French and Goanese territories within the territorial borders of our country. The interconnectedness of global events with domestic events comes to the fore in this session.
VoW is also a platform for pan India debates – for school and college students. Whether or not online education can replace classrooms is the subject on which schools will raise the factual and the counterfactual; the college debate is on whether India should recognize Tibet and Taiwan.

One would also like to make a special mention of the first-ever Inter-University  Sanskrit debate in the county: while it is not global yet, except in terms of participation of students from Nepal, next year we hope to turn it into a truly global conversation. The interest in Sanskrit, Sanskrit non-translatables, and the introduction of Sanskrit words in the lexicon of English is an issue that was first raised by Rajiv Malhotra, the founder of Infinity Foundation in Princeton, and has now caught the attention of scholars across the world. VoW is also privileged to host the first critical discussion on his newest book “5 BATTLEGROUNDS”, in which India is the case study to analyse the impact of AI in a variety of domains.
The other book which is being launched at this edition includes “Mapping the Global Future’’ by Ambassador Yogendra Kumar.  This book presents an alternative roadmap for a world characterised by geopolitical uncertainty. The surging expectations about a future world of democratic values and high economic growth, born out of superpower bonhomie at the end of the Cold War, did not lead to the promised outcomes. Instead, we are faced with deeply destabilising challenges, like climate change, widespread state fragility, terrorism, arms race, disruptive newer technologies, global economic volatility, and ineffectiveness of multilateral institutions, old and new..
(The author is Director, Lal Bahadur Shastri National Academy of Administration)

THE OLD ORDER CHANGETH GIVING WAY TO THE NEW

THE SECRET SERVICE IN INDIA