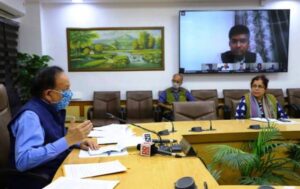 In a well-attended meeting on Science, Technology and Innovation Policy 2020 (STIP 2020) chaired by Union Minister for Science and Technology Dr Harsh Vardhan, leading experts delved into the Indian diaspora’s role in the country’s development. Speaking on the occasion, the Minister highlighted the importance of science and technology for the future of the country.
He took the opportunity to encourage Indian scientific diaspora to give their suggestions on this policy. He said the shared suggestion would be considered to be included in the draft of the policy. He added that the policy initiative has been taken up to generate and streamline key ideas in making STIP 2020 and that the Indian diaspora has been involved as a major stakeholder in the formation of the policy.
He said building such policy-level mechanisms that enable the creation of suitable opportunities to attract the best talents is important. He added that the recently held VAIBHAV Summit and the one-stop platform for science and technology “PRABHASS” that was launched there for diaspora engagement are the government’s proactive steps towards this goal.
He said STIP 2020 aims to realign sectoral focus and priorities and the proposed policy is expected to leverage the progress made by the STI system in recent years. Henceforth the policy will build a long-term pathway that should be able to fulfil the aspirations of millions of young Indian scientists and students.
He also paid tributes to Bharat Ratna C. V. Raman and pointed out the past couple of years have witnessed national growth which is placing India as a global STI leader. He said the country is engaged actively in emerging technologies like nanotechnology. The meeting was attended by several dignitaries of Indian scientific diaspora from the world over.
(Courtesy www.newsorbiter.com)