Since my parents were in Saudi Arabia and education in English was not possible, my parents sent me to school in America. I had an uncle in Chicago and that’s where I landed in the United States on a cold, snowy night on a Friday in January 1974.
My uncle got me admitted to a private school at one of the suburbs in Chicago. The school was Holy Cross High School in River Grove, Illinois.
Saturday morning my uncle went through the clothes that I got from Saudi Arabia and decided that they were not appropriate for me to use in high school in the US. So, he took me shopping to buy two sets of wool pants, two warm shirts, a winter jacket, gloves, and a cap. The next day, on Sunday, he drove me to show me where my new school was going to be and told me that the next morning I would be on my own. He showed me where the bus stopped and where it took me to school and said this was a piece of cake, no problem, just hop on the bus pay $0.25 and get off at the third stop. He said the bus would go for 10 blocks West, turn South, go two blocks turn West again and go four blocks and that’s where I get off. Simple, right?
Wrong! Ten blocks? What are these blocks? Furthermore, he said to be sure you take the westbound bus. West? Which way is West?
Monday morning, I woke up bright and early, ate breakfast prepared by my aunt, and went out on my adventure. I was lucky I found where he showed me the bus stop was and waited for 15 minutes, but no bus. It was cold outside, snowing and I knew I was going to get late to school. So, I started walking. I remembered watching English movies where they showed that in America in order to get a ride you show your thumb up. So, I started walking backward, still headed towards the way to school. Nobody stopped to give me a ride. I looked up and saw the sun rising and felt confident that I was still going in the right direction, in other words going West. I also realised that after walking for so long the street would end and I would have to cross the street and keep going again. Aha! So that’s what my uncle meant by blocks so I started counting the blocks that I had walked so far. Remembering the Indian map, I remembered Bombay was West, Delhi was north, Hyderabad was South, I started navigating myself based on my uncle’s directions and ended up walking all the way to my school. This was a two-mile hike that God only knows how long it took but I finally saw the sign that said Holy Cross High School. I was wet, tired but I got to my destination. I was directed to the principal’s office who took me around, showed me the school, took me to the bathroom to get my hair dried and my clothes dried by using the hand dryer that happens to be in just about every bathroom in America. 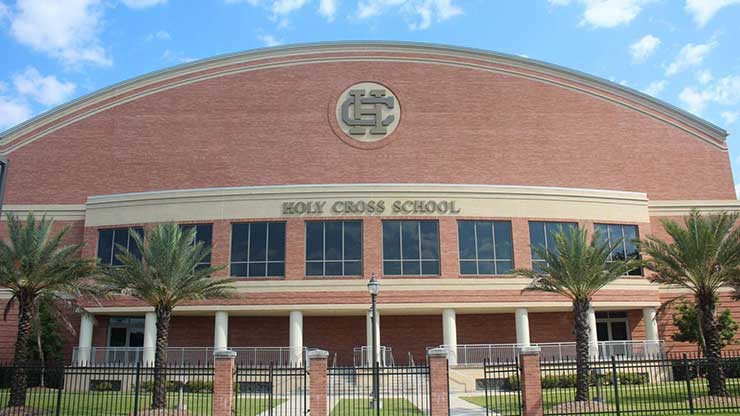 Thus started my education in America.
My school records from Hyderabad and the correspondent courses that I took in Saudi Arabia were already sent to Holy Cross High School in America. My new school decided that I needed one more year of education at Holy Cross before awarding me my High School Diploma. Since I joined in the middle of their school year (in January), I was admitted into 11th grade with an understanding that I would complete my education the following January (1974) when my parents were due to join me in America.
In my old school in Hyderabad, I had taken two years of Biology, two years of Chemistry, and two years of Physics. Since my parents were pushing me to be a doctor, I decided to repeat these classes in my American School to make sure I was better prepared for college in America. To my surprise, what I learned in two years in India, was finished in one, four-month, semester at my American school!! The pace of education was mind-boggling but seemed a lot easier because a lot of audio/visual aids were used to drive the point home (slides and video movies).
My schoolmates were almost all whites with a few blacks, and one brown, me! I was their first foreign student! I got a lot of attention!
Since this was a private school, a lot of students were dropped by their parents and some even had their own cars. The school did not have school buses like they do in Public Schools. There was a city (municipal) bus that stopped in the school parking lot after school that I used to take to get back home. One day, one of my schoolmates stopped me and asked, “do you have a dime on you?” I looked all over myself to see if I had something on my clothes, a mark, a bird dropping? When he found me confused, he repeated the question slowly, “do you have a dime on YOU?” I still looked confused, then he said he was short of $0.10 for a bus ride!! Here, a penny is $0.01, a nickel is $0.05, a dime is $0.10, a quarter is $0.25.
One day in school a group of students approached me and asked me if I wanted to buy a ticket for High School Prom? I asked them what a “Prom” was. They said it is a big high school party that is usually the highlight of their school year. I asked them how much, and they said $50. This, to me, was a big amount but they insisted that it would be fun and that I should not miss out. They even took me to our class teacher, and he also reaffirmed that it was a major high school event and that it would be a very memorable experience. After debating a lot, I finally agreed. They wrote down my name then they turned around and asked me who I planned to bring as my date! What? Date? Coming from India, from a very strict Muslim family, bring a girl as a date! I did not know any girl that I dared ask! One of my friends saw the despair in my eyes and came to my rescue. He said that no one has yet asked his sister out for the prom, that he felt bad for his sister, and he even offered to pay for my prom ticket if I asked her out!!
Sorry, I wasn’t ready for that!

(The author is a real estate investor, technology and banking consultant, who lives in Minneapolis, Minnesota, the USA.)