Before saying more about this exciting development for the many Hindus who live in and around Bath, you need to know some more about what makes Bath special – its intellectual power, its literary heritage and even its politics!
The city has two world-class universities—the University of Bath and Bath Spa University. The University of Bath was established in 1966 after receiving its Royal Charter and has consistently ranked among the top 150 universities in the world. Apart from its innovative engineering courses, the University of Bath is famous for both its flagship MBA and its Translation and Interpreting Studies programmes. Simultaneous interpreting has been taught at this university from the start. By comparison, China only started teaching courses on Interpreting after establishing diplomatic ties with the USA on 1 January 1979, while India still does not have a single university with a complete focus on Interpreting Studies and a fully-fledged ‘Interpreting Laboratory or Suites’. I understand that the lack of qualified professional interpreters of Indian origin has often forced those in India negotiating with the Chinese to over-rely on the Chinese side’s interpreters. As someone who has taught international negotiation skills for many years to business people around the world (and co-written a book on the subject), I find this extraordinary. Perhaps someone from the Indian Education Ministry and the Indian High Commission in London, should visit the University of Bath to learn about what they are doing in this field.

Bath Spa University, previously Bath College of Higher Education, got its full university status in 2005. It is known for its Grade I-listed buildings of the 14th century, and for its courses on creative writing, religion, music, and the performing arts. 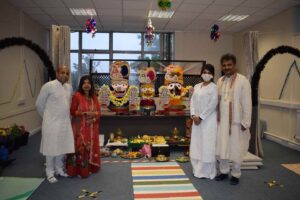 Jane Austen (1775 – 1817), author of world-famous novels such as Sense and Sensibility (1811), Pride and Prejudice (1813), and Mansfield Park (1814) which have inspired many blockbuster movies, lived in Bath for 6 years. She set many of her novels in the city.
The Conservative and Liberal Democrat parties dominate the politics of Bath. Chris Patten, the last Governor of Hong Kong and currently the Chancellor of Oxford University, was the Member of Parliament for Bath for thirteen years from 1979 but was unseated by Don Foster, a Liberal Democrat, in 1992. Like Mamata Banerjee in the recent West Bengal elections, Patten, as the Conservative party chairman, successfully orchestrated a national victory for his party but lost his own seat to Foster, who had been a local councillor for eight years.
In the May 2015 General Election, Foster stood down and the Liberal Democrats lost the seat to the Conservatives, but then regained it two years later, retaining it in 2019. Before becoming the MP of Bath, Don Foster served as a councillor for eight years. Foster is now an active member of the House of Lords, as Baron Foster of Bath.
I mention all this because Patten, Foster and the current MP, Wera Hobhouse, are internationalists, as indeed are many citizens of Bath (the city voted by a large majority for the UK to remain in the European Union). It was Foster who encouraged the idea of having a Hindu temple in Bath, and the Hindu community led by the Rajhansh family met him several times to discuss the possibility. Foster always attended the annual Lord Jagannath yatra (Chariot festival) in Bath. Current Liberal Democrat councillors, especially the former Mayor of Bath, Cllr. Paul Crossley, have also been instrumental in making the temple happen.
The temple is the culmination of a twelve-year campaign led by three people in particular — Susmita Rajhansh, Ashish Rajhansh and Bath’s first councillor of Indian heritage and the first non-white Deputy Mayor of the city, Dr Yukteshwar Kumar. Dr Kumar is a well-known Sinologist and a senior academic at the University of Bath, where he is Course Director of the Chinese interpreting and translation programme. He tells me, with evident and warranted pride, that he is the first person of Indian heritage to teach Chinese at any western university.
Dr. Kumar had this to say about Bath’s new temple, “Brilliant people build bridges, buffoons build walls. Temples are the best bridges to be a conduit in connecting communities. Many pseudo-secular people do not realise the significance and importance of a temple. Temples are not only the place of congregation for religious gatherings, but a temple like this is a place where communities from different religions and faith groups can congregate and learn about different cultures, languages, and faiths. Thanks to the huge efforts of many Bathonians over many years, the dreams of hundreds of Hindus in Bath and the surrounding area have come true.”
The temple is currently based temporarily inside a school (Culverhay, then briefly Bath Community Academy) which closed in 2018. The Rajhansh family managed to ship the three idols of Lord Jagannath, his brother Balbhadra, and his sister Subhadra, all the way from Puri, Odisha, in India. The idols are made from the auspicious Neem tree (Azadirachta indica or Indian lilac) while paints on the images are made from organic materials. 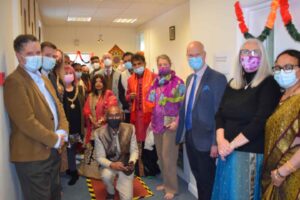 As Dr Kumar explained to me, the chief deities of Lord Jagannath in Puri are always constructed from the Neem tree, and they are replaced every 8th, 12th or 19th year, depending on the year that has adhikmasa or an extra month in the Hindu lunar calendar. Everything in this world, Dr Kumar went on, is susceptible to change and decay, and hence replacing the deities’ idols (called ‘Nabakalebar’ in Oriya) has been the tradition of the temple.
Hari Krishna Prasad and his wife Renu Bharati, a long-term resident of Bath, are the principal architects of this temporary temple. Like Ustad Ahmad Lahori, the chief architect of Taj Mahal, Hari and Renu poured their hearts into building this temple, inspiring other Hindu community members to join hands with them. Dr Ganesan Senthil Kumar, who qualified as a doctor from the University of Madras in 1991 and undertook his FRCS qualification in 1999, came to Bath in 2000 and is a renowned orthopaedic surgeon. Despite being extremely busy with his professional work at the hospital during this pandemic, he and dozens of Hindu community members from Bath and the surrounding area sometimes worked till 2 a.m. with Hari to decorate the temple.
The 2021 UK census will soon tell us the exact number of Hindus living in Bath and North-East Somerset. The current estimate is around 1,700. This temple will not only attract local devotees; people all the way from Liverpool and Leicester have already visited it, and in time to come people from distant European countries will surely pay a visit to the temple.
A senior diplomat from the High Commission of India in London, the Avon and Somerset Police and Crime Commissioner, Mark Shelford, the Mayor & Mayoress of Bath and of course, Dr Kumar and his wife as the Deputy Mayor and Mayoress of the city, along with several councillors were present to witness the idols being lifted to the main sanctum sanctorum.
I leave the last words to Dr Kumar: “In Jagannath tradition, Prasad—a religious offering to the Deities consumed by God in non-physical form and devotees accepting this as a blessing from God—is highly valued. It is said that Lord Jagannath has a very sweet tooth, and sweet foods like Poda Pitha should be offered to him. During the opening ceremony of the temple, different kinds of sweet foods were offered, and hundreds of devotees had precious prasad, which was made by Shri Anand and Shraddha Gaur, a couple who have also made Bath their home and have been successfully running the best vegetarian Indian restaurant in the city—The Indian Temptation. We hope that this temple will become a golden bridge in connecting communities inside England and peoples from India and England. I also hope and pray that a permanent Lord Jagannath Temple will be constructed soon in the city.” 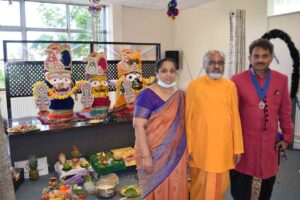 (The author edits and writes articles for an online magazine https://www.only-connect.co.uk and runs the
Conan Doyle Estate on behalf of the family of Sir Arthur Conan Doyle, creator of Sherlock Holmes.)