Repository of history and heritage

Recently, a restaurant was shut down for not allowing a woman clothed in a saree. It was pathetic that saree has not been included in the list of appropriate dresses in the hospitality world.
There is a long history of elegance and pride behind the six yards draped by the woman. Saree has always been indispensable and integral to Indian culture. It has been a source of inspiration and appreciation for costume lovers across the world. Saree is the only costume in the world which can be worn on all occasions.
Every woman and man has an emotional bonding with a saree. It is the only costume that is preserved for generations and passed on. The almirah of a house has at least one saree in memory of someone special. A beautiful saree contains memories that women wear, it symbolises art, history and our culture. It is not only a piece of cloth but also is a repository of family history. It has an emotional connectivity and bond for every woman.

There is evidence of the saree from the Indus Valley Civilisation which is seen in a statue depicting a female priest wearing a long piece of cloth like a saree. The word ‘saree’ is believed to be derived from a Sanskrit word meaning “strip of cloth” and, also, found in Buddhist literature as ‘sattika’, and later evolved as sati. With the passage of time, it has become known as saree. It was first mentioned in Rig Veda, the oldest surviving literature of the world, written around 1500 BC. It is evident that contemporary indigenous clothes derive from a high and hoary tradition.
The early statues show that the saree was draped in a sensual manner, which was tied at the waist, covered up the legs and came in front of the legs like a decorative drape. There was also mention of saree in Indian epics like the Mahabharata and the Ramayana. From the Indus Valley Civilisation to the establishment of empires like the Mauyras, the Guptas, and later to the consolidation of the Mughal Empire, every major dynasty in India contributed to the evolution of the Indian saree. Till the 14th century, the dhoti was worn by both men and women. 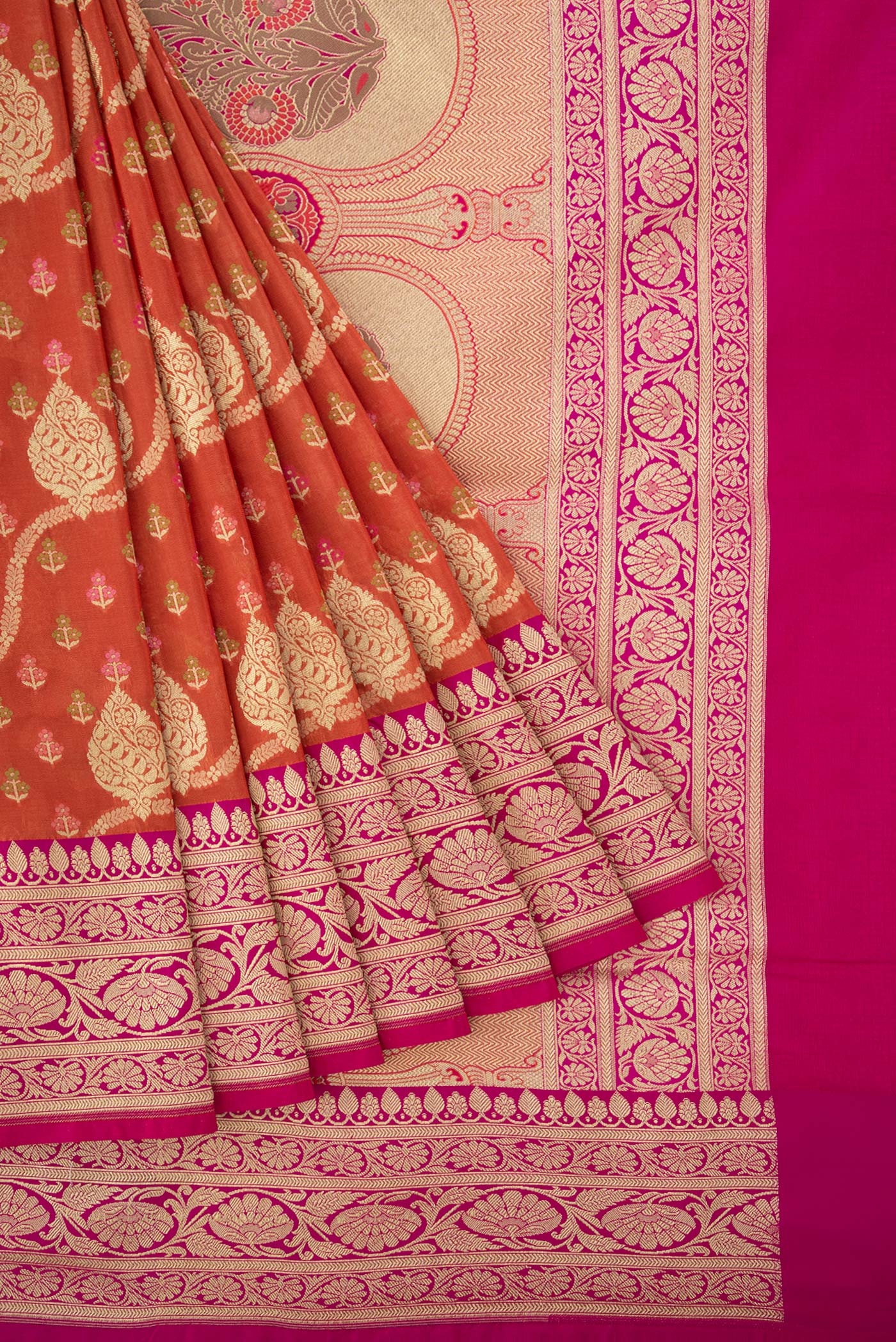 The social change has had an impact on the woven cloth, colours and designs. The indigenous people have developed a talent for popular art and a profound sense of beauty in designing the costume over time. With the evolving lifestyle and comfort, the costumes were redesigned but the six yards saree remained the same.
In ancient times, law regulated the use of certain types of clothes. The length of the garment was related to a person’s social status. Some of these customs persist even today in the use of ceremonial costumes on special occasions. The use of rich fabrics, embellishments and beautiful motifs were combined by the master weavers to make saree an ethnic garment.
Over time, a number of fabulous varieties were developed to enhance the traditional, cultural and aesthetic value of sarees. The Greeks have introduced the art of stitching in India where every region has evolved its own peculiar style. Later, various methods have been developed for weaving, dyeing, and printing of the fabric which have combined with the highly developed artistic finesse of the saree. The country has the grace to accept the best from the foreign influences and incorporating it into its already rich cultural heritage. This aspect of Indian cultural set-up can be perceived in the growth of the ‘saree’.
The saree has earned fame worldwide. In India, sarees are loved by the young as well as old women. Different regions of the country have different sarees such as Bandhni (Rajasthan, Gujarat), Chikan (Lucknow), Kota Doria (Rajasthan), Banarasi (Benaras), Taant (Bengal), Baluchari, Kantha (West Bengal), Kanchipuram, Madisar (Tamil Nadu), Patola (Gujarat), and Chanderi (Madhya Pradesh).

The popularity of saree in India can be gauged from the fact that it is worn on almost all occasions, be it a wedding, a party or day-to-day work. It has become the most popular outfit, which is dynamic, depending on the occasion. During important ceremonies such as a wedding, religious ceremonies and bridal wear, the saree is the incontestable outfit. India being a country of great cultural diversity, many of the Indian Christian brides started to prefer wearing white saree with a white blouse instead of their traditional Western wedding gown. Each region has specific patterns and designs on the saree.
The patterns on the saree have symbolic significance. Paisley (ornamental design using boteh or buta, a tear-drop shape with a curved upper end) and fish represent fertility, and abundance of food and children. These patterns were mostly imprinted on the sarees worn by people living in the coastal regions. Designs in the form of an elephant symbolise water, fertility, wealth, and good luck. It also exemplifies Lord Ganesha who is the remover of obstacles. The peacock depicted on the fabric represented the physical and emotional power of a person. The conch was also a symbol of the gods and represented the bugle used in war.
Similarly, the use of colours in the sarees also means a lot. In Indian mythology, the goddess is symbolised in a particular colour of saree like Saraswati in a white saree representing peace, Durga in red saree representing power. Different colours of sarees symbolise different virtues, qualities, and themes. Usually, a saree is chosen according to the colour suitable for the day. For example, on Tuesday people love to wear red-coloured sarees, green for Wednesday, yellow for Thursday, black for Saturday. Indians attach a lot of importance to numerology and astrology. Based on the astrological calculations, women choose the colour of the saree. And every occasion has a colour. Red-coloured sarees are draped on special occasions such as weddings, parties and other special moments. As red symbolises dominance and passion, women prefer to wear them on various occasions.
A saree gives a lady an attractive, beautiful, and fashionable appearance. It’s a versatile ensemble that can be worn on nearly every occasion. The ancient wear not only preserves the culture of India, it also expresses Indian pride.

Repository of history and heritage