A large number of Indian students who have been enrolled with three private colleges in Canada have their dreams and ambitions shattered. They need urgent help from the government of Canada to safeguard their future

“I took a loan from a bank in India to pay for the course fee of over $14,800 and I am still paying just the interest. Now the college has filed for the bankruptcy protection. I want the authorityies to refund my fee,” said Nisha Rani, a student of M College in Montreal, Canada.

M College is one of the three private colleges in Montreal along with CCSQ College and CDE College, which shut down their operations in January 2022. She enrolled into Early Childhood Education course in 2020 with M College and her struggle began since then.

Even though Nisha got admission in the college, she could not obtain the student visa from Immigration, Refugees and Citizenship Canada (IRCC), a department of the Government of Canada with responsibility for matters dealing with immigration in Canada. While waiting for the visa, she started the classes online from her hometown in Punjab, India and now after one year of study, the college has filed for bankruptcy protection, thereby leaving almost 2000 students, mostly Indians, in severe uncertainty regarding their academic future.

“It is a harassment at the global level. Sometime I think I have been punished for choosing Canada as the land for my higher study,” lamented Nisha. She sounded utterly frustrated while watching her year-long study getting wasted and the large sum of money going down the drain.

There are 633 students like Nisha in India, primarily from Punjab, who are adversely affected due to closure of these three colleges in Canada. These students were already struggling to obtain the student visa and started online classes meanwhile. Many have taken loans from banks and many of their families have mortgaged their agricultural land to fulfil their children’s dream to study abroad. Suddenly these students’ dreams have crumbled like a house of cards and they are feeling helpless while seating in another corner of the planet. They want the Canadian government to help them at least get their money refunded.

It is not only these 633 students who are stuck in India due to visa issues, who are plagued by the three colleges in Canada declaring bankruptcy.  There are another 1173 students in these three colleges, again primarily from India, who got their student visas cleared, reached Canada and already started doing in-person classes there.

But now they are facing the same challenges. They have one more added problem to handle. As the colleges have been shut down, their student visas are going to become invalid soon. If they cannot get into another college, definitely after paying the full fee again, they have to return to India, without completing their study, of course.

Harinder Singh is one such student from the same M College who came from India to Canada before the Covid pandemic swept across the globe to do two-year-long course in BusinessManagement. He paid $27,500 as tuition fee to the  college. He informed that students in Canada could legally work for 20 hours per week; it helps them to partly cover the living expenses in Canada. But after college shutdown they cannot even legally do that as they are no more considered international students. Many Indian students in Canada are now seen struggling to buy even groceries. “Many Indian students in these three colleges are going into depression. If the government cannot resolve this situation soon, we may even hear news of suicides”, Harinder pointed out; his tone sounded dark and depressing.

Many of these students in these colleges began their first session between October and November 2021. Soon after joining they were asked to pay the full-year fee within a few days. Normally, fees are paid per semester. Most of the students scrambled to collect such a large sum that goes into tens of thousands of dollars and paid to the college by early December 2021. After that colleges went into unusually long winter vacation of 40 days and when the time came to reopen in January, the three colleges filed for bankruptcy protection, leaving their students in.

Of course, none of these affected Indian students in these colleges could perhaps foresee this debacle. The ownership of all these three colleges and a related recruitment firm named ‘Rising Phoenix International’ comes from one single family — Mastantuono family. Ownership is maintained under an umbrella company named RPI Group.One of the shareholders, Caroline Mastantuono, was in India during Canada’s Prime Minister Justin Trudeau’s India visit in 2018.

The allegation was that in the past they tried to recruit foreign students and used fraudulent documents to accelerate the processing. Finally late last year, the Ministry of Immigration in Quebec (the province where Montreal is the largest city) suspended future study permit applications in 10 private colleges due to questionable recruitment practices for international students. The three colleges in discussion were also part of the list.

The affected students are desperately reaching out to the Indian Embassy and the government of Canada for help. When Anju Dhillon, a Member of Parliament from Montreal and first person of South Asian descent to be elected from the province of Quebec, was contacted, her office informed that the government of Canada was following the situation closely and trying to help the students. The government is giving the option to the students to pursue their studies from Herzing College, another college in the vicinity, completely free of charge. But students have concerns with this solution as Herzing College was also listed among the 10 colleges blacklisted last year.

Under such circumstances, the affected students have come under the banner of ‘Montreal Youth-Student Organization’ (MYSO). A committee has been created in India as well to cater to the needs of the students enrolled in these three colleges of Canada, who are stuck in India. Students in Montreal have come out in the temperature of -34o C in a rally to protest against this injustice.

An ex-student now running his own business in Montreal, Varun Khann is trying to help the students

Similar rallies were arranged in Brampton, ON and Surrey, BC within Canada. Another demonstration was done on February 10 in front of Canadian Consulate in Chandigarh. The students’ organisation is also helping them with necessities like grocery, medicine and other form of supports. Local gurudwaras are also extending help.

One of the ex-students and a leader of the union who is now running his own business in Montreal, Varun Khanna, mentioned that the organisation has hired a lawyer for the students. “We have sent memorandum to MPs and MLAs. We have three demands from the Canada government. Those who are in the last semester should be allowed to complete their courses.Those who have just started must be admitted to a public college with all credits transferred. Finally, those who are in India must either get the full refund or should be brought in Canada with student visa to complete their remaining studies in their course.”

Even though students are in desperate situation, they are pinning their hope that some resolution will emerge. This entire episode teaches a lesson: Aspiring students and their parents must be very vigilant and must enquire thoroughly about the colleges where they are planning to go or planning to send their wards. They must not fall in the traps of unscrupulous immigration agents as no one wants to see their loved ones in such situation, that too in a foreign country. 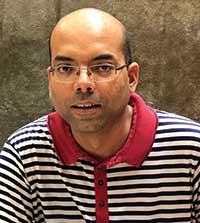 (The writer is an IT professional, passionate about Indian history, and the founder of  www. indicvoices.com)

A HOTSPOT FOR EXPATS

The stage set for the 17th Pravasi Bharatiya Diwas in Indore

THE WALKING MONK FROM TORONTO